What is bullish and bearish market

Regardless of what type of investment vehicle you will choose reach your investment objectives, you will frequently hear the terms “bull” and “bear” to describe market conditions. Due to the fact that market direction is the primary force influencing the profitability of your trading activity, it is of uppermost importance to know the definition of these terms and understand how the fit into the context of trader’s commentary.

What Are Bear and Bull Markets?

The terms “bull” and “bear” reflect the conditions surrounding particular market or group of markets. Markets known to appreciate in value over a specific period of time are called “bullish markets” while those known to depreciate are called “bearish markets. Moreover, the terms are used to describe the attitude investors have toward a particular market or security and reflect the general market sentiment.  In other words, a bullish market refers to a market that is on the rise while bearish market term is used to describe the market which gradually depreciates in value over time.

What is bullish market?

Bullish market is characterized by gradual but consistent increase in the price of traded securities or other financial instruments. Due to the crowd psychology of investors, such conditions usually attract more investors to the market who put their faith in associated stock, commodity or currency and further contribute to the bullishness of the given market. Bull markets usually emerge in response to strong economy and robust labor market. In some cases however bull markets can contribute to the formation of asset-price bubbles and eventually burst once the rally starts to lose steam.

What is bearish market?

By contrast, a bear market is one that is in decline. Share prices are continuously dropping, resulting in a downward trend that investors believe will continue, which, in turn, perpetuates the downward spiral. During a bear market, the economy will typically slow down and unemployment will rise as companies begin laying off workers. Basics look really easy’ right? It may have been true, but detailed breakdown of both terms is necessary to understand the meaning of bullish and bearish it stock and forex markets. 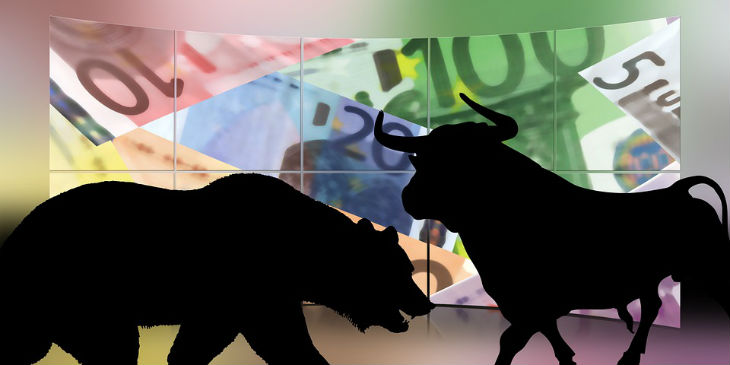 It is unclear from where exactly these terms came from, nor has the history been merciful to leave clues as to how the terms came to such widespread recognition. The most common explanation is that bull and bear markets were given such names because of the way in which each animal attacks their victim. Bulls usually charge forward with horns lifted up into the air. Bears, on the other hand, wallow their sharp-clawed pawns in downward direction, landing heavy strikes on those unfortunate to get caught. Also, bulls and bears were frequently placed on arena during Ancient Rome to the amusement of the screaming crowd.

Furthermore, bears and bulls were literally once fierce opponents, when it was popular to put bulls and bears into the arena to fight. Similar entertainment activities were actively during Elizabethan London and In times of ancient Rome.

While the primary indication of Bull or Bear market is the direction the prices are heading, there are several other distinctive features that traders should be knowledgeable about. Below is the list of features commonly found in Bull and Bear markets.

Supply and Demand – Bull market is characterized by strong demand and weak supply for tradable instruments. In other words, too many buyers are chasing the limited quantity of available securities which other are hesitant to sell. As a result, those willing to obtain the financial instrument will compete by accepting to buy the security at a high price resulting in further decrease of available supply and hence continuation of price increase. Bear market is complete the opposite. In times of bear market, more are willing to sell rather than buy. The demand is much lower than supply I times of bear market which results in further depreciation of prices.

Investor Psychology – The direction where prices head is usually determined by the attitude investors have towards particular currency, commodity or stock. In other words, investors tend to show particular collective behavior dictated by market condition and fundamental background; at times of uncertainty, for example, investors tend to switch to safe-haven assets such as Gold and Silver and stay away from currencies, which as we all know are vulnerable to sudden depreciation and volatile swings.

These factors contribute to the formation of so called sentiment toward particular market or security which reflects the atmosphere dominating the market. In bull market, investors are positive and are willing to obtain stock, currency or commodity in order to make profit. Bear market on the other hand is characterized by reluctance to buy securities with investors temporarily switching to precious metals or fixed-income instruments in anticipation for reversal in the equity market.