US CPI to move the markets today

In the midst of tweets from President Trump, the U.S equities have gained on Monday, however not in a very convincing manner. The President continues to stir trouble in the White House.  However, on the other side of the globe, China managed to calm investor sentiment this morning, which was the result of Chinese Premier’s statement that the country wants to avoid the trade war. Asian markets remain strong, and the Hang Seng Index from HK has progressed well.  European equities appear stable and in for a good day of trading. However, the Americans have proven rather dicey to rely on the past month and the Wall Street will be under constant monitoring to see if the scene improves over the next two days and yields better results.

US CPI to move the markets today

United States inflation numbers could stir up a storm on the foreign exchange market over the next few days. And while the Producer Price Index published yesterday showed some improvement over the previous with 0.3% gain against the projected move sought to 0.1%, the CPI numbers released later in the day are expected to rule the party during  today’s trading session. While the U.S Federal Reserve has been going on about their inflation for the past year, however there is no proof to support the claim. A weak result through the inflation data could make Euro and Pound stronger , putting more pressure on the USD as a result.

At time of writing, the EUR/USD currency pair is traded at 1.2370. Visible resistances are at 1.2387 and 1.2433. The RSI oscillator is close to the upper boundary of the range at 66 on 4H time frame indicating that market is quite overbought. As such, failure to break above 1.2387 might send the price south and demonstrate the price’s proclivity to retrace whatever was gained on the back of US-China trade dispute. All things considered, we are neutral of EUR/USD. Wait for confirmation of either continuation above 1.2387 for long position or break  lower uptrend line for short. 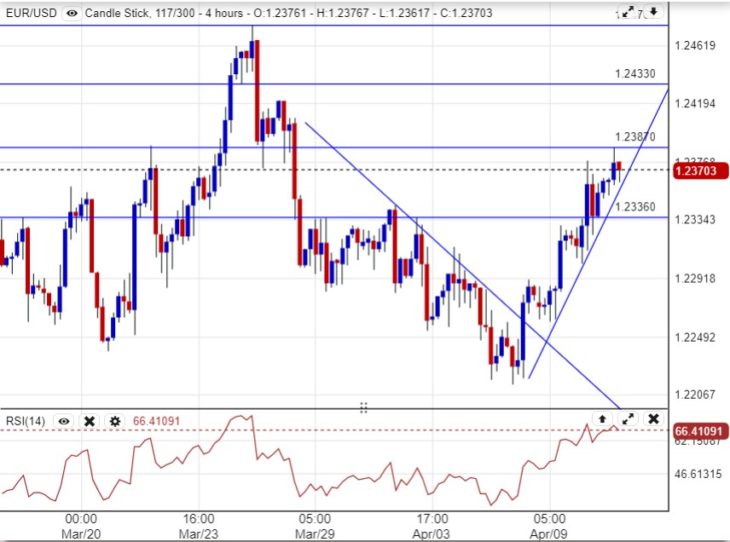 Buyers Attracted to Crude Oil due to the change in the Sentiment; Stable Mid-Term Range Tested

U.S Crude Oil showed a stable advance on Monday when the sentiment changed again in the broad market. The commodity is priced at aroubd 63.00 U.S Dollars a barrel and has demonstrated the capability of testing its mid-term range – inclusive of the highs and lows. Opposition to Crude Oil appears to be in the 65.00 U.S Dollar range.

Release time is at GMT

All About the RJVX12 Algorithm

SPI Crypto – All About this Shopping Token

About AlphaFXC and Its Trading Models